Proclaim!’s Kim Peterson regularly takes the lead on local fishing expeditions for kingdom catch. He tells about one recent outing that was particularly challenging but invigorating!:

Our pastor’s Sunday message came from I Peter 3:13-16 — how to respond to intimidators. It turned out to be a fantastic heads up prelude to that day’s fishing expedition.

As I listened to it I had a strong sense that I would soon be living it on the street. My wife Jeanne and I both had the same feeling in our spirit about what was about to unfold — Blessed opposition! And did it ever come. As if it were wonderfully choreographed. (I am convinced it was.) The morning message outline played out in real time during our 2 hour outreach foray in Hemming Plaza. Thankfully we had both made sure that Jesus was firmly sanctified, enthroned as Lord as we headed out to offer the dark world God’s marvelous light. 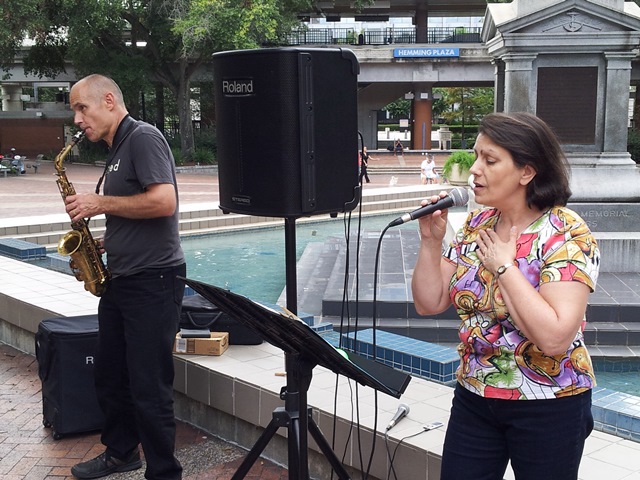 The first hour was smooth, just like we all hope things will be when we make efforts in Jesus’ name. People applauded and thanked us. As we played and shared, Steve and Susan Schneider spoke extensively with people one on one. We were enjoying that luscious, velvety, almost cozy sensation that feels so nice and does little good for strength and vitality of soul. God had more in mind for us and for the glory of the One who suffered all for us and for the Father’s glory.

Soon, as we continued speaking the gospel to the crowd sitting all around us, a teenager skate boarded right in front of my face and muttered, “Hail Satan” as he passed. “Finally! It has begun,” I said to myself. “Here we go Jeanne. Did you hear that?” We were both ready for action and poised to love with words of truth and hearts of compassion. At the morning service we had been alerted to God’s design for our day. How cool is that?

The teen rode by again, spewing the same nonsense but this time louder. One of his friends walked over to our sign, “No God. No life. Know God. Know life” and jeered, making a mocking gesture to his other 8 or so buddies. When the song we were singing concluded we engaged the guys directly and challenged their alleged allegiance to Satan. The subsequent interchange was heated, with gross insults coming continuously from them. We kept our composure reverent and God-trusting and our behavior gentle, not bombarding as we lifted up our Lord.

The whole bunch of them then planted themselves directly in front of us, dancing derisively and going to great effort to get us to “fold.” We, on the other hand felt increasingly more and more secure and confident in the face of their shameful display. It was as if Peter were standing there with us nodding affirmingly, smiling knowingly and pointing to the words he’d penned for such occasions. At that point I thanked the teens for staying and for coming in close to hear the words that they needed to transform their hungry and lost souls.

A few minutes later, another person in the audience approached the young men and said something to them. In the next moments they were gone. We thanked God they had come and were able to see and hear what we pray will one day liberate them and save them from destruction. God is powerful and present. The enemy is desperate and deceiving. God’s Word keeps our spiritual eyes clear and wide open to the realities that surround us; the things that really matter.